Portrayal of women in Indian media 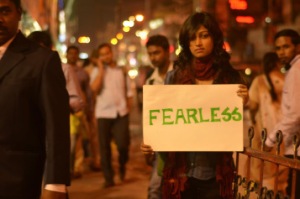 In December 2012, the rape of the young student Jyoti Pandey in a moving bus in Delhi shook the conscience of a nation. Within months, the Indian Parliament has passed a Rape Law to ensure that rapists, stalkers and those who perpetrate crimes against women are brought to book. Even as the debate rages on — as to whether this will be deterrence enough and whether the law makers and keepers will be able to offer victims and their families the speedy justice that they seek — it’s also relevant to take a look at the role that media plays in creating and disseminating gender-sensitive entertainment.

Here is a Part I of a blogpost that I wrote for Her Film Project — a global forum for women filmmakers.

And here’s the link to Part II of the POST at HER FILM PROJECT which discusses the role of Social Media.

Would appreciate your thoughts and feedback…

Author & Screenwriter
View all posts by Adite →
This entry was posted in Random Musings and tagged Her Film Project, role of media, women and media, women filmmakers. Bookmark the permalink.