Hollywood has a long tradition in adapting stories. “Probably half the movies made are adaptations of one sort or another,” writes screenwriter John August in his blog. “The original source material might have been a novel, a short story, an article or even a 1970′s TV show,” In India, too, the trend for adapting began in the early 1950s with the Bengali classics being the most popular source materials. The trend continues till date though the emphasis has shifted from classics to popular fiction of the Chetan Bhagat variety!

What about adaptations from screenplays to books? Perhaps the most celebrated example of a film franchise encompassing the whole gamut of books, video games, toys and DVDs is the Star Wars franchise–as many as 358 titles written by 76 authors have been published netting total revenues of a mind-boggling $1,820,000,000! 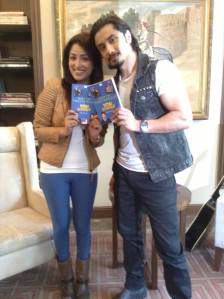 The emergence of the movies-to-book-adaptation trend is beginning to make its presence felt in India. Interestingly enough, here, the initiative is being led by a publisher rather than a film production company. Harlequin India is the subsidiary of the Toronto-based publisher – Harlequin Enterprises Limited. In a unique venture of its kind, Harlequin India released a romantic caper titled, The Sum of Two Wholes – Total Siyapaa. The novel, written by Neha Sharma, is an extension of the screenplay for the movie ‘Total Siyapaa’ written by Neeraj Pandey and directed by E. Sreeniwas. It is a heart-warming romance between Aasha Singh, a fiery and confident Punjabi desi from India, played by Yaami Gautam, and Aman Ali, a smart-aleck and suave Punjabi desi from Pakistan, played by Ali Zafar.

Amrita Chowdhury, Country Head of Harlequin India, says, “This is the first ever script to novel conceptualization for India, where the novel is an extension of the screenplay, without replicating it. In the past couple of years, other attempts have been done- of rewriting the screenplay as a novel, or creating coffee table books on the film or the making of the film, or creating short stories around film characters. This experiment with ‘Sum of Two Wholes: Total Siyapaa’, takes the concept further, by providing something new and different to readers who may have seen the film. In a panel discussion hosted by Harlequin in 2013 on “Confluence of Books and Cinema: Opportunities and Challenges in converting books to screenplays”, senior business leaders from the film industry such as Amit Khanna, Chairman Reliance Big Entertainment, and Sudhanshu Vats, CEO of Viacom, had remarked that as new-age Bollywood films are looking at original and different story ideas, perhaps time had come to explore storytelling across formats, not just from books to screenplays, but the reverse translation as well. Total Siyapaa, co-distributed by Reliance Big Entertainment, has been the vehicle for testing this idea.”

As stories continue to be the common factor between books and movies, it is inevitable that such “reverse adaptation” holds huge potential for publishers like Harlequin. The company has recently announced a tie up with the NFDC Screenwriting Lab. The Lab is a three-part programme, which will focus on developing scripts based on romance and women-centric plots. Participants will be mentored by three eminent people from the Indian film industry. The last stage of the Lab will culminate at Film Bazaar, Goa, where the participants will be given the opportunity to pitch the projects to prospective producers. Harlequin will also offer book deals to some of the selected projects, and organise independent workshops with mentors from the publishing industry.

Such collaborations between the publishing and film worlds is definitely great news for screenwriters and novelists alike.

1 Response to Collaborating to tell stories: the Harlequin India initiative