Delhi Reveals its ‘Do It’ Spirit 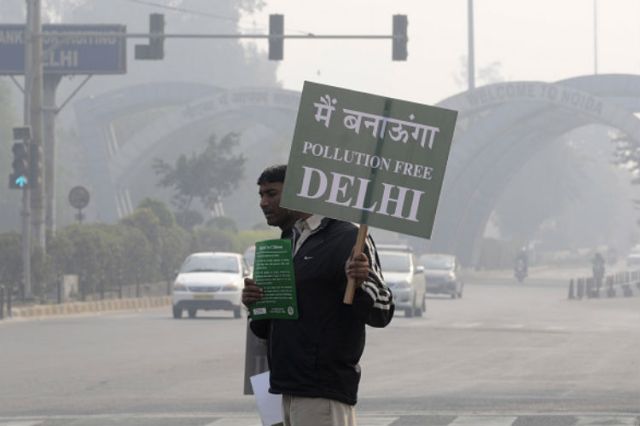 There’s something about the new year. It inspires you to turn a new leaf and make a promise to yourself to stick to your resolutions. So, whether you want to kick the butt, start on an exercise regime, finish your much-delayed writing project, learn a new craft or simply spend more quality time with your family, it all seems do-able. As you take baby steps into the year, actually working towards your new and improved goals, every step forward brings in a rush of adrenaline, a sense of achievement. You can actually feel the halo glowing around your head as you go about “making it happen”.

Something similar has happened to Delhi–the city where I live. By the end of 2015, a string of reports about the persistent high levels of pollution in the National Capital Region of Delhi had set the alarm bells ringing. Combined with the high-pitched media campaign that focused on poisonous fumes spewing trucks and the Supreme Court’s diktat to to the Delhi government to clean up the environment just about everybody was going ballistic about the “Choking” Capital of India. The government for once decided to take matters seriously and formulated a plan of action. It seemed kind of fitting that the Chief Minister who suffers from a persistent cough and is seen wrapped in mufflers all through the winter months, should kickstart a programme that was aimed at giving Delhi-ites a break from perennially smoggy skies and the noxious fumes that we breathe.

The Odd-Even scheme–a rationing scheme wherein cars with odd-numbered licence plates would be permitted to run on odd dates and even-numbered cars on even dates–was introduced as an experiment for 15 days. This was greeted by an outpouring of jeering and name-calling by the cynical Twitteratti. However, miracles do happen! Huge numbers of citizens supported the move and the notoriously bad-tempered Delhi drivers actually went out of their way to support the government’s initiative. While stiff fines were levied on those who broke the Odd-Even rule, amazingly enough, there were few violators. Rule-breakers were shamed by volunteers with roses and a sympathetic “get well soon” greeting. While the jury is still out on whether or not the exercise actually helped make Delhi’s air more breathe-able and pollution-free, it definitely brought respite by decongesting traffic. But perhaps the biggest gain of all was that Delhi proved to a disbelieving rest-of-India that the capital’s citizens were capable of beating the odds to make their city a better place!

Author & Screenwriter
View all posts by Adite →
This entry was posted in Screenwriting Adventures. Bookmark the permalink.

2 Responses to Delhi Reveals its ‘Do It’ Spirit