Behind the Scenes of ‘The Indian Tycoon….’

As the Krish-Maya love story developed my jittery nerves did an anxious dance.
The love story had to be balanced with Maya’s quest for revenge. After all, she wasn’t looking for love. And especially not with the son of her Enemy No. 1. 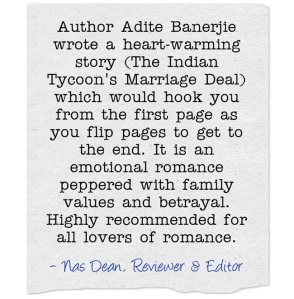 There was plenty of potential conflict in that premise and it had to be mined just right. If it was heavily skewed towards the revenge plotline the book wouldn’t qualify to be a romance. So there had to be enough power in the inner conflict as a result of their attraction for each other.

That was enough to freeze me up. The more I went into analysis mode, the tougher it became to type up the words.

I needed to switch off my analyst self and look at the whole thing from a new angle.

That’s when Snapshot Moment #2 happened. What if I wrote a scene between a girl and a guy who are attracted to each other and let the chemistry work its magic?

It turned out to be a revelation – after reading what I’d written I realised this story would be an M&B with an Indian accent, atmospherics et al. After the initial draft was done, it just needed to be tweaked to make the scene relevant to the situation and their inner motivations.

As easy as making rotis, right? But kneading the dough can be a bit tricky! 😉

1 Response to Behind the Scenes of ‘The Indian Tycoon….’