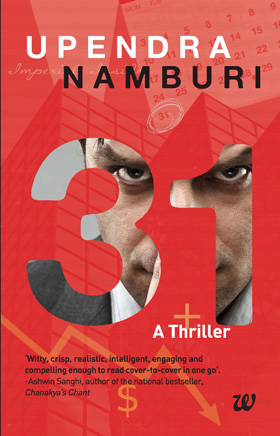 Upendra Namburi’s debut novel, 31, is about life in the fast lane of corporatedom.

Ravi Shastry, the regional head of a MNC bank is a great team leader and one of the top performers in his bank. The last 31 days of the financial year – March – are perhaps the most crucial ones in any corporate warrior’s life. But Ravi is a cool customer. He has nothing to worry about. He is eyeing a promotion or even an international assignment. But then what’s life without a few curve balls, right? Before he knows it, Ravi is fighting to retain his job as peers and team mates suddenly turn into conspirators. Even as he battles charges of fraud and corruption, his personal life turns grim. Will Ravi weather the storm or will the no-holds-barred competition do him in? And how much will Ravi have to compromise on his morals to emerge victorious?

The premise of the book is fascinating and has all the ingredients of a gripping corporate thriller. The protagonist teeters from one crisis to another as he counts down to the end of the month. The author throws in enough complications, twists and turns to keep the reader engaged. It is fast-paced – at times a bit too frenetic – and a realistic portrayal of the dog-eat-dog world of corporatedom.

But despite the frenzied action, the read is far from satisfying. There are a multitude of characters and keeping track of them becomes a tad annoying: with everyone mouthing the same corporate-speak, there is no unique voice to any of the characters. In the flurry of Blackberry pings, IMs, emails, tweets, the author has completely ignored the essentials of character development or even description to lend authenticity to the characters and their moral dilemmas. The book merely skims over the themes of loyalty and betrayal, corporate one-upmanship, corruption of values.  If only the author had reined in the multiplicity of characters and spent some time on fleshing out the key characters, this would have been a much stronger story. But perhaps the most disappointing part of the book was the climax, which was a total cop out. By going for a feel-good ending, the author undermined the potential of the premise and lost out on the opportunity to give a powerful resolution to Ravi Shastry’s story.