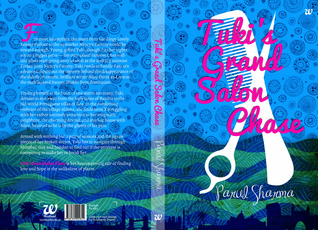 The Blurb
AFor most hairstylists, the move from the dingy Lovely Beauty Parlour to the upmarket Nancy’s Factory would be reward enough. Gifted, young Tuki though has her sights set on a bigger prize – her own salon! Her well-laid plans start going awry as soon as the striking tattooist Faraaz joins Nancy’s Factory. Tuki needs to handle Faraaz’s advances, figure out the mystery behind the disappearance of the elderly, eccentric, brilliant writer Bijoy Dutta and rescue the multilayered Sweety Bhabhi from destitution.
Finding herself at the heart of one storm too many, Tuki decides to run away from the leafy lanes of Bandra to the old-world Portugese villas of Goa. In the comforting embrace of the village Aldona, she finds herself struggling with her rather untimely attraction to her enigmatic neighbour, the charming Arvind and sharing house with Bijoy, haunted as he is by the ghosts of his past.
Armed with nothing but a pair of scissors and the jigsaw pieces of her broken dream, Tuki has to navigate through Mumbai, Goa and London to find out if the universe is conspiring to make her or break her.
Tuki’s Grand Salon Chase is her heartwarming tale of finding love and hope in the unlikeliest of places.
Buy @
Amazon.com |Amazon.in | Flipkart

Parul Sharma grew up in the small towns of Uttar Pradesh. This was fortunate because it ensured that she ran into some rather quirky characters pretty early on in life. Once done with schooling, she made the rather dubious choice of studying Economics, a sentiment with which Economics agreed, no doubt. This made way for a degree from Mudra Institute of Communications, Ahmedabad where many inspiring cups of tea were consumed, among other things.

She has worked with the corporate sector for several years in companies such as Genesis Burson-Marsteller (New Delhi), Arvind Brands Ltd (Bangalore) and Indian Market Research Bureau (Mumbai) in marketing communications and qualitative market research, but she also writes novels.

The bestselling Bringing Up Vasu: That First Year was her first book and described the travails of Mira, a young, first-time mother. Her second novel was By The Watercooler – the story of Mini and Tanya, young women who find that the corporate ladder is actually a greasy pole. All her books have been published by Westland. She has also contributed stories to the Chicken Soup For The Soul series and to Femina.

Parul lives in Mumbai with her husband, two children and sometimes, if she’s lucky, Kittu, the street cat.

Parul is passionate about animals and their welfare and would like to open an animal shelter in the future.